The Girl & The Robot - The Beauty of Decay 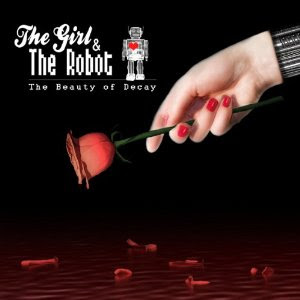 I am always looking for new music (as I am a self admitted music whore) and a while back I came across information about a new group by the name of The Girl & The Robot. What made me especially interested to hear this new project was upon finding out that it involved the singer and musician who goes by the name of "Plastique". For those who are not familiar with that name, she is part of the excellent group Welle:Erdball. What, that doesn't help things? Shame on you, Welle:Erdball is an amazing synth group who was also one of the pioneers of Bitpop. With The Girl & The Robot, Plastique teams up with instrumentalist Deadbeat (of Second Unit, which I shall have to look into after seeing his impressive musical talent).

After locating a copy of The Girl & The Robot's debut album The Beauty of Decay, I was anything but disappointed. From the very first song, Whole, I was hooked. Now it is not often that I find an album that I am willing to recommend after a single listen. Usually it takes at least two before I believe it is even proper to comment on an album. But even as I was listening to it for the first time I found myself raving about it, and the album wasn't even finished yet! The songs are catchy without resorting to any cliche tactics but through honestly great music, wonderful lyrics and beautiful vocals. This album has quickly become one of my most played and most enjoyed.

They have a sound that is very much their own, it can be described as an almost minimalistic Electro-Pop with hints of New Wave and Synth thrown in for good measure. But these are only crude attempts at pigeon holing their sound for descriptions sake, they truly deserve a listen before one can appreciate their sound. When describing them to others, the best way I have been able to do so was as "dreamy-energetic". Certain songs are more on the dreamy side then the energetic, but even these make one want to at move with the music. In fact I find myself unable to sit still at any point in this album, even if it is just to sway to the softer moments. Throughout this album they invoke an retro sound, but one that also sounds modern. This trait gives The Girl & The Robot the kind of sound that would make them sound at equally at home alongside 80's New Wave as well as modern Electro.

One thing all the songs on this album has in common besides being amazing music is that they are all emotionally aware. The music, the vocals, they lyrics, all of it fits perfectly with the intended emotion without coming across as haughty or overbearing. You are truly able to feel what these artists wished to convey with their music.

In the formation of The Girl & The Robot it seems that Plastique and Deadbeat have found the perfect match for one another. With Deadbeat's instrumental prowess and Plastique's absolutely gorgeous voice, they have weaved an album that could easily become the modern gold-standard for their genres.

This album was released in March of 2010, so this review is a bit late. This is partially because I was a bit late in acquiring a copy (probably around December of 2010) as well as the fact that I have only recently started to write reviews over various sources of media. But my love for this album compelled me to write a review none the less.

Email ThisBlogThis!Share to TwitterShare to FacebookShare to Pinterest
Posted by Cyc at 7:22 AM