Now that is just sad.

Iran. If you believed the former Bush administration, then Iran is the next greatest threat to American Freedom (C). Now what exactly would Iran use to threaten our freedom? Well...not very much. They tried, they really did. In fact I can almost see where the Iranian President painted a smiley face on the corner of their 'weapons' for such good effort!

Take for instance their 'brand new' and 'advanced' fighter jet, the Shafagh.

According to the commander of the Iranian Air Army, General Attollah Salehi, the new fighter is "similar to the F-18 fighter jet, but it is more capable and has been manufactured domestically… designed, remodeled, optimized and made more capable by our engineers… no country has aided us in its production." So apparently it not only is similar to a F/A-18, but superior, well we better be sure to keep our fighter pilots on high alert. And it gets even better. Yes, those amazing Iranian engineers and scientists have made it a stealth air craft! But not the stealth like we are used to. No, instead of absorbing or dispersing radar waves, you know, the way us silly Westerners go about doing it, the Shafagh is "more difficult to pick up on the radar systems compared with the normal version due to its higher maneuverability". Yes, the Shafagh is so advanced it out maneuvers those pesky radar waves.

What I find a bit sad though is that it isn't a newly developed airframe at all. It you take a close look, it is just a modified F-5E Tiger II, take a look: 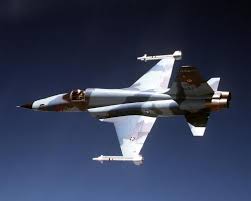 In fact the US sold a few F-5's to Iran and many other countries. They were outdated versions of the T-38 trainer and giving such technology to independent nations would make them feel good about themselves (they have big boy toys now!). Other then turning the single tail into a twin and some possible avionics upgrades, there really isn't much distinguishing it from the old 'Tigersharks' that we sold to them. Which were outdated back in the 1970's.

So we know that Iran has 'Advanced Stealth Fighters' but they recently showed their newest piece of doomsday warfare, the unmanned bomber named the Karrar (the Farsi word for Striker). This terror of the skies is..well...I'll just let you see for yourself:

Wow...I wonder if it was one of those snap together models or one of the super hard ones that require glue and stuff. But it gets worse. Yes, it can get worse. Not worse as in terrifying (as, honestly, I would be more worried that it would lose control and end up crashing on me then able to actually hit it's target) but worse in how the Iranian's describe their new 'toy'. President Mahmoud Ahmadinejad said that "The jet, as well as being an ambassador of death for the enemies of humanity, has a main message of peace and friendship,". Wait...what? So this is the happy drone of sharing and friendship? What about that whole 'ambassador of death', was that just a joke? I really don't know how else to say how sad this is. There just are not proper words for this level of fail.

So those are the latest threats coming out of Iran. This is the best Iran has to offer. In all honesty, if I was an American fighter pilot or controlled a UCAV (Unmanned Combat Aerial Vehicle), I would almost feel bad if I ever had to go toe to toe with these feats of Iranian ingenuity. I would imagine it would have the same feeling as pushing over the little kid who just really wants to play with the big kids. You could do it quite easily but you would feel horrible afterward.

Email ThisBlogThis!Share to TwitterShare to FacebookShare to Pinterest
0 comments Posted by Cyc at 6:54 AM

Conservapedia: where rational thought, skeptical inquiry and general sentience goes to die. The land of tinfoil hats, martyrdom envy, and where batshit insanity is the preferred standard.

Come and prostrate yourself on one of our many crosses for your amusement, now in children's sizes! Do you find thinking for yourself or forming rational coherent sentences far too difficult for your underdeveloped and religion addled brain? Then stop by one of our many retailers for pre-packaged life choices and modes of thinking, one size fits all!

Afraid of life's many mysteries and complex questions? With our new and improved 'godidit' super-deluxe package, all your fears and concerns can be assuaged in single motion. Never have to think or say anything again!

Now open: Kids Corner! Where you can drop off your annoying children with their ever present questions so that you may continue your mindless and loveless existence free of the possibility of taking responsibility for anything! Here your precious spawn will have every last bit of curiosity and creativity wiped and replaced with mindless genuflections, pre-programmed responses, and a deep seated terror of everything good in the world, just like you! Act now and get a free 'if it feels good, you will burn in hell forever' kids coloring and activity book!

So next time you have one of those horrible things known as independent thought creep up in your mind, stop by and have people tell you exactly what you want to hear so that you can, once again, go back to your mindless existence as God's good little sheep. Remember only God loves you...unless you screw up then you will burn forever! Have a pleasant day.

Email ThisBlogThis!Share to TwitterShare to FacebookShare to Pinterest
0 comments Posted by Cyc at 5:50 PM

Sanity starts to return to California

That little bit of idiocy known as 'Proposition 8' in California has been over turned. Sorry Mormons, looks like you went and spent all those millions to sway voters to enact Prop. 8 for nothing. Just like with that whole racist thing you went through quite a few years back, it looks like, once again, the courts have moved in and stomped on all your discriminatory fun.

But the religious 'right' did their best to try and fight this...wait...no they didn't. They were so sure that they were going to win they only had two witnesses. You know, for once, I'm actually glad that fundy conservatives are idiots, it made granting basic freedoms that much easier.

Now, unfortunantly, this isn't a dead win. Those with small minds and large mouths are already appealing the decision. So the judge has held off on enacting equal marriage in the state until the hearings are over. While I would like for things to start as soon as possible, I can see the logic in this. By doing this, he shows that he isn't an 'activist' judge (whatever the hell they are anyway) as well as preventing and dashed hopes in case things go badly during the appeal process. Though, at this point, I think there is very little reason to suspect that this will occur.

The way that this discriminatory law was overturned was simply brilliant. Instead of trying to argue that same-sex marriage should be allowed, they put forth that by denying same-sex couples the ability to marry, the state effectively was upholding negative stereotypes and discrimination for which there is no evidence to support. And this is exactly what such laws do. They make it ok to make a certain group of people second class citizens. Something that flies right in the face of the 14th Amendment to the Constitution (The 14th Amendment, infuriating bigots since 1868).

One can only hope that this will be the turning point leading to equal marriage laws being passed in other states that used similar arguments. This sets precedent and that was one of the biggest things holding back such laws. Part of me actually hopes the angry peons defending the 'sanctity' of marriage push this to the supreme court only to have the ruling upheld and turning a state concept into a national one. Now wouldn't that be a bit of wonderful irony?

Email ThisBlogThis!Share to TwitterShare to FacebookShare to Pinterest
3 comments Posted by Cyc at 10:31 PM