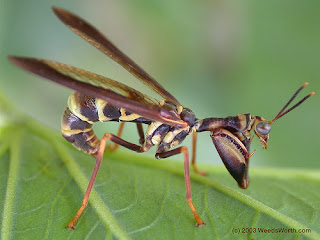 For those who are afraid of insects, the above image will probably haunt your dreams for years to come.  For the rest who are unfamiliar with this unusual insect, your first reaction may be to stare in disbelief at what, for the sake of your sanity, you hope must be photoshopped.  But it is a very real insect.  Appearing to be what happens when you graft the front end of a Praying Mantid on to the body of a wasp, this bizarre amalgamate of a creature is actually not closely related to either.

The Mantidflies or Mantsipids, family Mantispidae, are a group of insects who are most closely related to the Lacewings and Antlions.  Belonging to order Neuroptera (the net-winged insects), these predatory insects are, despite their potentially disturbing appearance, harmless to humans.  With over 400 species currently recognized and with ranges throughout much of the world, they are a surprisingly common, if poorly known group of insects.

Nearly all Mantidflies have an appearance closer to a fusion between Lacewings and Mantids, but a couple species have developed a form of mimicry to avoid their own predators.  These, like the above Climaciella brunnea, have an appearance that is close enough to those of wasps to deter most predators.  Their Batesian Mimicry --the process of a harmless species having the appearance of a dangerous one-- has gone so far as to take on the form of whatever the most populous species of paper wasp from the genus Polistes is in their area.  Because of this, their appearance will vary from region to region despite all being members of the same species.


The larvae of Mantidflies are, like their adult form, strict carnivores.  In some species, the larvae will actively hunt the larvae of other insects, such as beetles and flies, where as others are known to be parasitoids of wasps, bees, and even spiders.  It is the case of the spider parasitoids there is a disturbingly high degree of specialization to be found.

Those species that target spiders can be divided into those with two distinct strategies.  The egg penetrators and the spider boarders.  The egg penetrators, like the above Green Mantidfly, have active larvae that seek out spider egg cases and, upon finding one, chew through the top and climb inside.  They then begin to feed on the developing spiders as they go through their various stages of metamorphosis safe within the spider's egg sac.  Eventually, an adult emerges from the empty cocoon and flies off.

The spider boarders, however, have lost the ability to chew into a spider's egg case and instead waits for a spider to walk by.  While this may seem close to suicidal, the tiny larvae can often climb on to a spider and latch on without difficulty.  The small, flattened larvae attaches itself to the underside of the abdomen where it can patiently wait.  It nourishes itself by feeding on the hemolymph, the blood, of the spider.  If the larvae has found itself on an immature spider, some species are known to simply crawl into the book lungs of the spider where it will be safe from being dislodged when the spider molts.

If the larvae is lucky, it will have found a female, but it will make do with a male as well.  Here, it will simply wait for the male to find a female to mate with and jump ship as the two mate.  Once on the female, it waits for its host to lay its eggs.  As the spider is spinning the silken cocoon around the eggs, the Mantidfly larvae crawls inside undetected.  It then enters its next stage, a grub-like form that has only one goal, feed.  Once it has consumed the contents of the egg cocoon, it will spin its own cocoon and metamorphosize into its adult form.

Such spider parasitoid Mantidflies are far from rare.  They are so common that all major groups of hunting spiders are attacked by these spider boarding larvae.  While web building spiders are safe from this fate, many still end up being the targets of the egg penetrating species.

Such spider boarders are so common that a fossil of one has actually been recently found.  Discovered by Michael Ohl of Berlin's Museum of Natural History, the larvae was found attached to a spider that had been unlucky enough to find itself not only with the parasitoid Mantidfly larvae but also caught in tree sap.  As the sap hardened over time, the two were preserved perfectly in amber.  Dating to around 44 million years ago, the specimen shows that this form of symbiosis has been used in what is essentially its present form for quite some time.  It is possible that this tactic goes back even farther as the earliest Mantidfly fossils date to the early Jurassic, 180 million years ago.

Email ThisBlogThis!Share to TwitterShare to FacebookShare to Pinterest
Posted by Cyc at 8:37 PM

You're right. The first image WILL haunt my nightmares now! I have a terrible fear of wasps and hornets.

Still, it's a remarkable-looking creature. I doubt that many predators would mess with something that looks like a wasp-mantis hybrid!

Thanks for continuing to provide posts like these. The world of arthropods and other such tiny creatures truly shows us the vast range of weird and disturbing quirks that natural selection can produce. If there's life on other planets there must be some very scary things waiting for us to discover out there.

At least you won't have to worry about these attacking you anywhere other than in your dreams.

It is my pleasure, and thank you for enjoying them. It makes it a bit more rewarding to write such articles.

The thought about what directions evolution might have taken elsewhere has always intrigued me. The potential for vast diversity is great, but so it the chance for convergent evolution which I think would be just as fascinating, as it would tell us just as much about the origins of life, if not more.

Hey, I just started following your blog, looks like we have at least 2 things in common. Mind giving mine a glance and see what you think?

Hey, just started following your blog, looks like we have at least two thing in common. Mind giving mine a glance?

Thank you for stopping by Thorn. I shall take a look right now.

I am an Near-Death-Expiencer, k?
So I totally know now s'up...
and whats DOWN after croakinX.
you DO NOT wanna descend.
Wiseabove.
I know it's cool to say
you're a staunch atheist
through your mortified existence;
you receive honor N whatever
cuzz you proclaim you refuse2believe.
Thats fine.
God has His Heavenly Watch.
When your times up, it's up.
Better to believe now than wait
till you're in the grave N the
nasty bugs appear.

'the more you shall honor Me,
the more I shall bless you'
-the Infant Jesus of Prague
(<- Czech republic, next2Russia)